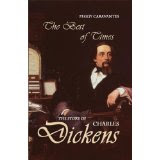 Best of Times: The Story of Charles Dickens
Charles Dickens is one of the most famous authors in the world. His books, including the classics A Christmas Carol, David Copperfield, Great Expectations, and Oliver Twist, have had an incalculable impact on literature. But the man behind these flights of imagination was not as cheery as the comedy of his novels might suggest. His father's extravagant spending left little for Dickens's education: he had only a few years of schooling. At the age of twelve, when his father was remanded to debtors' prison, Dickens was sent to work in a factory. The experience scarred him deeply, and he never got over his fear of debt or forgot what it was like to be young, alone, and afraid.
Dickens's rise to literary fame was quick. The Pickwick Papers was all the rage by the time its author was twenty-four. His astonishing eye for detail and his sense of humor helped Dickens reach a previously untapped audience in the poor and the growing middle class. While Dickens contributed substantial sums of money as well as time and energy to charitable efforts, he was a cold father and a distant husband. His life was as complicated and dramatic as his novels, revealing a complex and fascinating man who devoted himself to telling stories that illuminated the people and the times of Victorian England.
One of Young Adult Reviewers of Southern California's Recommended Titles for Young Adults, January-February 2006

REVIEWS: "Caravantes discusses the writer's early influences that resulted in his interest in exploring social ills in his work. Through his flair for drama, his tendency to exaggerate, and his heartfelt emotions about the causes about which he wrote, Dickens not only provided entertainment to his audiences, but also awakened them to the plight of the poor . . . the book is interesting reading and well documented. It will not only provide material for reports, but will also be enjoyed by biography buffs."
--School Library Journal, December 2005

"Caravantes shows how Dickens drew on his own experiences to write powerfully about the suffering of the poor through the eyes of a child, even as he used wry humor. In addition to writing about Dickens' success, she discusses various difficulties during his life; she's very honest, for example, about his strained relationship with his wife and children . . . with clear, spacious type, and many interesting quotes and photos, this will attract readers . . ."
--Booklist, August 2005