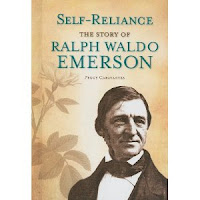 Self-Reliance: The Story of Ralph Waldo Emerson
Ralph Waldo Emerson became a Unitarian minister when he was twenty-five years old but soon began to question his commitment to the denomination's beliefs. Eventually, he resigned his ministry, choosing instead to write and speak about his own ideas. In the process, he became the most influential writer and philosopher in the United States.
Emerson's life was marked by ill health and family tragedies that challenged his commitment to his doctrine of self-reliance. He found solace in both his love of nature and his commitment to the American Transcendental Movement, which emphasized an individual's intuitive ability to live a spiritual life free of religious doctrine and social customs. He popularized the group's ideas in his essays and public lectures. Over a long and productive life, Ralph Waldo Emerson made himself into the most important figure in the first flowering of a truly American culture.
REVIEW:  "Succinct, broad-reaching, and peppered with lively anecdotes, this biography slots easily into the World Writers series' consistently strong list. Following a traditional cradle-to-grave chronology, the title frankly discusses the interpersonal, spiritual, and artistic challenges this author faced during the course of his lifetime and how those struggles informed his famous works. Young researchers will enjoy the many revealing quotes that inject a spirited sense of the man, in love, in argument, in inner conflict, and in discovery of their own talents and influential ideas. In Self-Reliance, Caravantes quotes Emerson as a young student, whose dramatic self-loathing may strike a chord with young teens struggling with similar crises of confidence: "I find myself often idle, vagrant, stupid, and hollow." . . . Overall, this compact,engaging title, supported by a time line, thorough chapter notes, and suggested reading, is an excellent starting point for middle- and high-school students seeking information about an author of whom surprisingly little has been written for a young-adult audience."
--Gillian Engberg, Booklist, August 2010